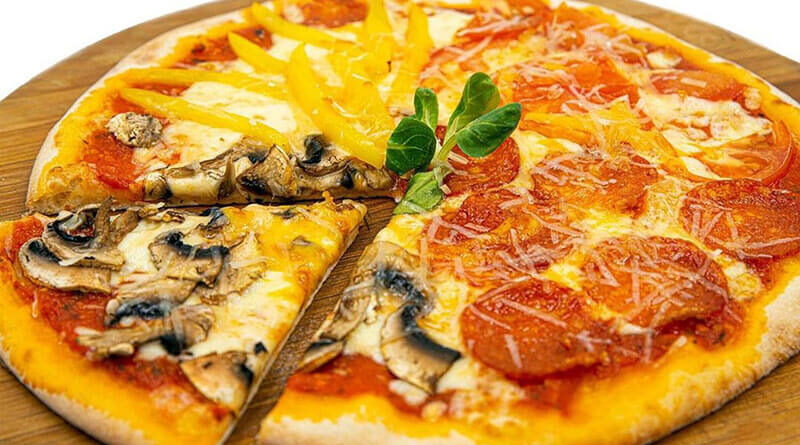 According to a survey conducted on the Internet, pizza is a favorite dish for 78% of World Wide Web users. Versatility of pizza – and in a variety of shapes and types (you can bake not only round, but also rectangular – the so-called Roman; open or closed, as a pizza “Calzone”), and in different calories (diet vegetables and calories with meat, brisket, etc.). In addition, this dish is suitable for different food systems.

Ingredients in the pizza can include a variety, and each nation adds something different: Brazilians – green peas, Costa Rican – coconuts, Japanese – squid and eels, Ukrainians – thinly sliced brisket, and residents of India – not only minced lamb, but also pickled ginger and even soy cottage cheese. Fans of unusual extravagant dishes can try pizza with caviar, oysters, dandelions, river crayfish. There is also dessert pizza, which is made with nuts, chocolate and jam. But the French have distinguished themselves with the most refined ingredients: in the process of making pizza they use all kinds of cheese: parmesan, Roquefort, brie, gouda, chevre.

Which pizza is the best? We offer to get acquainted with the most popular and, as the users of the World Wide Web believe, the most delicious kinds of this dish. So, TOP 10 best pizzas – take note!

Each of the four parts in which the pizza is divided symbolizes one of the seasons. The canonical pizza recipe was born in the late 19th century. For pizza was mixed elastic dough. At the rate of 1 kg of flour had to take 600 ml of warm water, 4 tbsp. olive oil, 25 g of beer yeast. The classic version of the pizza is baked in a special, wood-fired Pompeii oven with a hemisphere vault. In case of heat in the oven 450 ˚ C, the dish is ready in 90 seconds.

At home, the oven can be as follows: roll the dough in a circle, place it on a baking tray slightly oiled. Lubricate the base with pizza sauce and place on top of each of the four different parts of the pizza: artichokes and olives (representing spring), black pepper and salami (summer), mozzarella and tomatoes (symbols of autumn) and mushrooms (winter).

Hawaiian pizza has gained popularity in the west of the USA, Canada, Europe and Australia. The filling for this pizza is performed in different variations: red onion, green pepper or jalapeno is added to it, but it is always cooked with ham and slices of fresh pineapple.

The recipe for Ham & Pineapple Pizza was invented in 1973 by an Australian teacher Jane Golding. Americans enthusiastically accepted the new recipe, although there was no mention of Hawaii, and in popular pizzerias of those years the dish was called Canadian Bacon & Pineapple Pizza.

How do you make Hawaiian pizza? Put the dough in a preform lightly buttered. Lubricate evenly with the sauce, sprinkle with grated cheese over the sauce, lay out bacon, pineapple slices and onions, bake until golden at 250°C.

One Italian cosmetics manufacturer distinguished itself by producing a whole line of cosmetics with the smell of the national dish – pizza. The idea itself is funny, although pizza is better to eat than to smell it. Are there any pizzaiolos among your acquaintances? Don’t forget to congratulate them on the 25th of October on their professional day, and maybe they will treat you to the best pizza of Capriciose by kindness of heart. You don’t know anyone like that? It’s okay to make a “Capricious” pizza yourself.

Put on dough, sauce, mushrooms, chopped garlic, pickled cherry, ham, canned olives, Ricotta and Parmesan cheese. Spray with olive oil, season with pepper, salt. Put in an oven heated to 250°C for 20 minutes. Sprinkle ready pizza with finely chopped herbs. Rizza capricciosa is cooked in an incredible number of ways: in the topping you can find mushrooms, meat, fish, all kinds of vegetables – artichokes and corn.

Salzone (calzone, or “envelope with filling”) is a kind of pizza: it is baked in half. The filling is traditionally made of ricotta, ham, mushrooms, mozzarella, parmesan and oregano. Calzone pizza was originally baked in a frying pan right on the stove. This dish is very popular as an appetizer in central and southern Italy. Italians often refer to pizza panzerotto as its other Italian name.

We offer to make pizza Calzone yourself. Finely slice ham, mozzarella cheese, fresh herbs, add a slice of red pepper to taste, parmesan on a large grater, mix it with ricotta cheese. Roll out the dough thinly (5-7 mm), place the filling on one side of the dough and add a spoonful of pizza sauce. Cover the other half of the dough, pinch the edges. Place Calzone pizza on a hot sheet, splash with water and olive oil and bake at 250°C for 10 minutes. Cool slightly and bring to the table.

The Naples seek to prove their status as the birthplace of the famous dish with all truth, and therefore any rebuttal of this hypothesis is considered groundless. For Neapolitans, pizza is a matter of honor. By the way, the recipe for this dish is non-negotiable, as it was legalized by Alfonso Pecoraro Scagno, Minister of Agriculture.

After such statements, there is probably no point in trying to make Neapolitan pizza at home. We will compensate you for the Neapolitan snobbery with a little scary story. In the last quarter of the century, there have been about ten rumours of local bakery owners digging up old coffins in cemeteries to save on firewood and using them as fuel for ovens, breaking and shredding coffins into rubble.

It’s not for nothing that Mom used to say: home food is the safest.

Alexander Dumas also wrote that pizza absorbed the wisdom and cunning of Italians: a slice of bread, olive, garlic, golden apple (tomato) and a small fish taken separately, it is impossible to saturate a person. But if all this is gathered in one bouquet, a Neapolitan can give a person the opportunity to eat, enjoy and listen to music.

Seafood pizza is one of its most exquisite varieties, and its main ingredients are the freshest gifts of the sea.

How do I make seafood pizza myself? First prepare the garlic sauce: grind the garlic, grind it with salt, add black pepper and olive oil. Rinse and peel the seafood. grate the lemon peel, add the juice and the peel to the seafood. Leave it for 15 minutes. Add finely chopped garlic, thyme leaves, olive oil and salt. Cut olives and olives into mugs. Roll out the dough in a thin (5 mm) layer and place it on a hot baking tray, grease with garlic sauce, spread prepared seafood and sliced olives on top and sprinkle with cheese. Bake at 250°C for not more than 8 minutes.

Once Italian pizzaiolo thought: for fans of seafood there are wonderful pizzas with seafood, for true connoisseurs of spicy Italian salami – pizza with pepperoni, mushroom lovers are offered a mushroom … Why is still not invented pizza for cheese lovers? It’s urgent to fill this gap!

Quatro formaggi pizza is classified as “pizza Bianca” – “white” pizza, without tomato paste. In such a pizza there is only a delicate, melting flavor of various cheeses and there is nothing superfluous.

You can make “Four Cheeses” pizza yourself, and for the four main components take a spicy Dor Blue cheese, flavorful Fontina cheese, classic Parmesan and Mozzarella with creamy flavor. To season the butter, take half a glass of basil and oregano, pour them into a container and pour the olive oil for 2 hours. The resulting butter, grease the dough, place the cheeses on top, add the spices (mixture of Italian herbs) and place in the oven at 230°C for 15 minutes.

This spicy pizza was invented in Calabria, south of Naples. It’s based on salsiccia Napoletana, an Italian salami. The Americans call their version of this famous pizza “pepperoni”. Americans and Canadians annually consume 10 kg of pizza per person, and the most favorite and popular is pepperoni pizza, second only to hamburgers.

The name “pepperoni” is borrowed from the Italian word “pepper”; it is clear that the dishes with this sausage will have its spiciness and spiciness.

Do you want to make devilish pizza in an American way? Why wouldn’t I? Place the peperoni or salsiccia Napoletana sausage, Mozzarella and Parmesan cheeses, mushrooms and chilli red peppers on the dough evenly smeared with the sauce, splash a little bit of olive oil. Bake for up to 8 minutes at 250°C. Sprinkle ready pizza with dried basil, cool slightly and serve on the table.

According to the Sicilians, the most delicious street food available in Palermo all year round is sfincione. In the rest of Sicily, it is known as Sfincione di San Giovanni or San Giovanni (a treat for the holiday of Ivan’s Day). Most American immigrants in New York and New Jersey from Sicily make this juicy and soft square-shaped pizza.

The recipe of classic Sfinciuni has 3 obligatory ingredients: anchovies, Italian pecorino cheese and a lot of tomatoes. Onions, olives, salami, mushrooms are often added, and basil, cardamom and oregano are added from spices and greens. Dough should be cooked on a lush yeast base, and bake for 25-30 minutes at 220 ° C. oven temperature.

Sadly enough, the main reason why Margarita pizza was long ignored by the higher light was the way it kneaded the dough (with legs), plus there was simply nothing to eat this dish delicately – there were no devices. And then by order of one of the nobles Gennaro Spadaccini was melted a special “pistil” for the chef, who should have beaten the dough. And for food, the trident fork received a fourth tooth. For the festive table in honor of Margarita Savoie’s birthday a huge pizza was prepared, performed by the chef Don Raffael Esposito and his wife Razina Brandi. Since then, Margarita pizza has been a favorite gourmet royal dish.

The recipe of the pizza is fixed in a special standard DOC (Denominazione di Origine Controllata). So you can try to cook. Grease the dough with tomato sauce made exclusively from San Marzano tomatoes. Put it in the oven for 10 minutes, then take out and add the young Mozzarella di Bufalo cheese. Pour extra virgin olive oil over the pizza, sprinkle with sea salt and add some fresh basil leaves. Put it in the oven again for a few minutes until ready. It’s just, isn’t it, like everything brilliant.

Round and generous pizza, like the sun of Italy, brings joy to gourmets and lovers of simple, simple, uncomplicated dishes. And the pizza, which is cooked at home by caring hands, is truly delicious food! The main advantage of this amazing dish is its variety: varying the composition of the stuffing, you can always cook and festive treat, and a nourishing dinner dish and a light snack. Experiment, and we wish you inspiration in the kitchen and a pleasant appetite at the table!