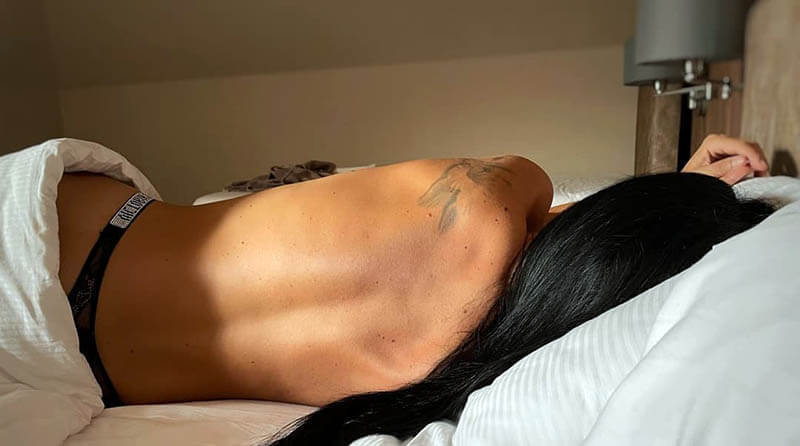 You’ll give me a beautiful treatment, and I’ll give you money for it. Maybe. It’ll be a compromise. You don’t look at other girls, I don’t drill your brain for it. Compromise.

On breaking up, she said: “You don’t know how to compromise. You live your life the way you want and spit on others. I can’t live like that anymore.”

I said: “What makes you think that?”

She said: “In all the time we’ve lived together, you haven’t given me a single complaint. That’s not the way it works. No matter what I did, you just smiled. It’s not normal, it can’t be like this and it can’t go on like this. You could have at least pretended to care.”

And I said: “Yeah, you’re probably right. I don’t know how to compromise.”

When I was six years old, my dad left us. And my mom found herself alone with two kids and a lot of debt. Working two and a half jobs, it’s very hard to pay enough attention to the kids. And my little brother and I grew up on our own. Pretty quickly we learned to run the household, cope with problems, and deal with each other without resorting to outside help.

It is true that sometimes my mother would have days off. And sometimes she had enough energy left to take care of our upbringing. Now I understand that at such moments she was trying to catch up, trying to get involved in our lives. But she had very little time, and all the involvement was dumped on us in a big, squeezed lump. And then we were only perplexed and tried to get away as quickly as possible: Mama, we are brought up as we are. And the diary entries had long since been dealt with. And that glass was broken a week ago, why talk about it now? And my brother and I had a fight the day before yesterday, and yesterday we made up. What’s there to talk about?

And we gradually developed a simple approach to life: what we need, we will do ourselves. If we don’t do it, we don’t really need it. The main thing is to leave us alone and don’t ride our brains out. That’s the best thing you can do for us. And we’re not going to ride on your brains. It’s the best thing we can do for you.

I haven’t been able to compromise since then. This inability sooner or later led to breakups with all the women I lived with. All of them. Without exception.

You don’t care about me!

Why would you think that?

Because you let me do whatever I want. That’s not how it works.

You could at least pretend to be interested in me. You could have at least acted jealous when I was dancing with that moron.

What for? If you like dancing with him, dance with him. It’s beautiful.

I don’t like it! He’s a moron. I thought you’d take me away from him. You never did. You don’t care about me at all.

I don’t believe you. You could at least pretend to care. For my sake.

What’s the trade-off? For some reason, every time there’s talk of compromise, the conversation comes to the point where I have to do something. Why? For there to be a compromise. Why compromise? To make my opposite party happy with life.

The formula for compromise, which is used everywhere, looks like this: get into someone else’s space; see if you like it or not; if you like it, start bargaining about the terms on which you will stay in that space. This is a compromise. But it sounds a lot like blackmail.

When I hear that a compromise has to be made, it’s not that I grab my gun, no. It’s just that I immediately start looking very carefully: who is trying to hoodwink whom here? Who and what are they trying to sell here?

I always have a very simple question: why compromise if everyone wants the same result? I go to the market, I want to buy a tangerine. An elderly Turkmen is sitting at the market, wanting to sell a tangerine. He sold it, I bought it, that’s all there is to it. Compromise begins when I want a free tangerine. You give it to me, and I won’t do you any harm. And we’ll have a compromise.

You give me a nice treatment, and I’ll give you something for it. Maybe. There will be a compromise. You don’t look at other girls, I don’t drill your brain for it. You dance to my tune, I don’t use everything you told me against you. You give me your wallet, I give you your life for it. Also a compromise. Or: you give us oil wells, and we won’t bomb you for it.

I do not know how it is in the international arena – it’s all away from me and not interesting. Maybe that’s the only way it’s possible there. But I don’t understand how you can let compromises into your home. In your bed. How you can run this trade between loved ones. Between those who have only one interest: to stay together.

I want to be with you, you want to be with me, which of us is going to put conditions on which it is feasible? And – why? What will I bargain with you? And if I have to bargain with you – what will we be together for? What do you need from me but me? What shall I require of you but you? And is it possible to buy you with compromise? Am I for sale?

Compromise is always a trade. I don’t know how to compromise. I don’t think I want to be able to.

When we were boys, my little brother was always asking for my company. He was interested in us. He whined, he pestered, he pestered. He’d get a smack, or even a kick, and everything would fall into place: no compromise, we weren’t interested in you.

But one day he got into a fight with a group of guys four years older than him. They were talking bad about his older brother, about me. Since then he’s been a regular member of our neighborhood. And no compromises.