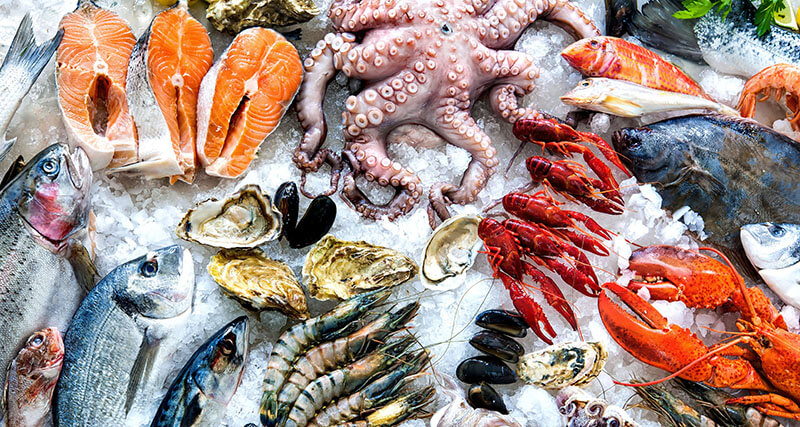 Fish is a nutritious but often dietetic product. But which species of fish are the most useful? This article will tell you about the benefits of seven fish species.

Fish is, without a doubt, a very useful product. Which fish is the healthiest? Which species should be preferred? Doctors strongly recommend adding fish dishes to the menu at least twice a week. It contains highly digestible protein, this food does not create a feeling of heaviness. It contains many vitamins A and D, as well as fatty acids, which prevent diseases of the cardiovascular system.

Which fish is healthier: Top 7 species

We have prepared a rating of seven most useful fish species, the inclusion of which in the diet will improve the mood, tone up, improve skin and hair. In addition, regular consumption of fish without contraindications is an excellent prevention of many health problems.

The healthiest fish is tuna

You can find many useful fish lists on the Internet. And there’s tuna in each of them. It’s a leader in vitamins and nutrients. In this case, its caloric value does not exceed 80 kcal per 100 grams. Tuna meat is pure protein. It is very low in fat and has zinc, phosphorus, calcium, selenium and vitamin D. You can try the best tuna in the world in Sicily.

There are some general rules for choosing the right fish:

It has to be sea fish. It is sea fish that gathers all the substances needed by the body, and salt water is a natural disinfector.

The fish has to be oily. It has a higher concentration of vitamin D and the fatty acids that the body needs.

Fish must be small or young. It is believed that fish are able to absorb toxins from the water, and therefore, the less the fish stayed in the water, the less toxins have accumulated.

The most useful fish is trout.

Trout is one of the favorite fish species.

The use of oily red fish improves the cardiovascular system, prevents the formation of blood clots. It contains many B, A and D vitamins, as well as selenium, phosphorus and folic acid. The trout is slightly less caloric, and also contains sodium, potassium, calcium, manganese, magnesium, fluorine. And, of course, Omega-3 and Omega-6 fatty acids are essential to the heart and the body as a whole. In addition to their basic properties, they help the endocrine system, promote proper bone formation and metabolism.

How to make cod steak

The codfish is ready for steaks!

The most useful part of this fish is the liver. Cod has almost no cholesterol. Its white meat contains 19% protein and only 0.3% fat. Regular cod consumption strengthens your immunity, improves the nervous system and metabolism.

The most delicious and healthy fish is halibut.

Continuing the research, what fish is the most useful, we note that halibut contains serotonin and melatonin, which keep the mood normal and regulate sleep. It is recommended for elderly people: if it is included in the diet on a permanent basis, it will prevent Alzhemer’s disease. Proteins contained in halibut normalize brain cells, prevent their dying out and improve nutrition.

Which fish is healthier: fresh flounder.

Flounder is also a healthy and delicious fish.

This cute sea fishing fish is good because it contains natural aphrodisiacs. Therefore, it is also recommended to include it in the diet, especially since it is a frequent guest in Russia. Although the leaders of the world flounder catch are European countries – Belgium and the Netherlands.

These are relatively oily fish species. They contain up to 11% fat and 17% protein, which is why it is difficult to overestimate the benefits for the body of this fish. In addition, they have a lot of calcium and sulphur. They are good for the beauty of skin and nervous tissue.

Do not be afraid! Or just CatFish.

Catfish, though not marine, is useful. Its tender, sweet-smelling meat contains all the necessary fats and proteins. Amino acids contained in catfish are useful for mucous membranes, nervous and digestive systems.

But it’s not even about which fish is healthier. The main rule is that it must always be fresh. Even the river, large and relatively dry, but fresh fish will be much healthier than not very fresh tuna.

Months when you can’t eat fish

On the eve of summer holidays do not forget to be doubly careful with fish and seafood. Especially those that you buy in the markets and order in coastal restaurants.

Remember the old saying that you can’t eat fish in those months when there’s no “p” in the name? Of course, do not take it to heart and for the whole of May, June, July and August to deny yourself a fish. But it is not superfluous to be vigilant. Remember that the already short shelf life of fresh fish in the summer heat is reduced by several times, and catering establishments, market vendors and even large supermarkets often ignore this fact.

Now that you have a list of the most useful fish, it’s time to go shopping and adjust your menu. Be healthy at all times!