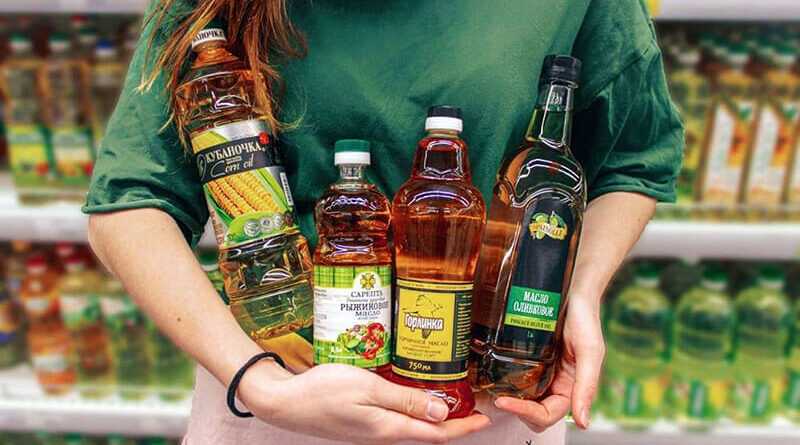 Which oil is better suited for cooking? Is it possible to fry with unrefined olive oil and why is sunflower oil harmful? List of frying oils.

Before going on sale, most types of vegetable oils go through refining processes – that is, temperature treatment and, often, chemical purification. Although refined oils are better suited to frying, their use can be harmful to health.

For example, refined palm oils may contain carcinogens and trans fats. Refined olive oil, on the other hand, is quite safe. Which oil can be used for frying and which can’t? Why do dieticians recommend limiting the use of sunflower oil?

It is often believed that sunflower oil is the best option for frying and cooking. This oil is cheap, almost odourless and cholesterol-free. However, nutritionists remind that using sunflower oil can be a health risk.

The cause of possible harm is high content of Omega-6 fats in sunflower oil. These fats, in contrast to Omega-3 or Omega-9, are only needed in small amounts. In fact, any type of sunflower and corn oil (including unrefined) is 60-80% Omega-6.

Olive oil, on the other hand, is the fat of Omega-9. The Mediterranean diet, built on the use of olive oil to fry it, is a benchmark for good nutrition. In addition, it is possible to fry on rapeseed oil – its composition is close to that of olive oil.

It is not the Omega-6 oils themselves that are harmful to health, but their consumption in large quantities. Research suggests that the best ratio of Omega-3 to Omega-6 in a diet is 1 to 1 – but eating food fried in sunflower oil makes the ratio 1 to 10 or even 1 to 20.

The consequences of the imbalance – micro-inflammations in the body and disturbance of cell regeneration processes¹. The situation is aggravated when a person does not consume salmon, salmon, fish oil or other Omega-3 sources. It should be noted that an Omega-3 deficiency in diet is a typical problem.

Can I fry in olive oil?

Olive oil (exactly like canola oil) consists mainly of mono-saturated fatty acids Omega-9, neutral for health and not affecting the balance of Omega-6 and Omega-3. The main question, however, is whether olive oil is safe to fry and whether it loses its beneficial properties.

Although when olive oil is heated to high temperatures (and frying involves temperatures above 200 ˚ C), the antioxidants contained in it partially lose their properties, harmful elements in their composition do not appear. In other words, olive oil is completely safe for roasting food.

The technology of wringing olives is based on the fact that first the oil is cold-pressed (unrefined olive oil), then – by heating and centrifuges – refined. The latter is cheaper, but the difference is more in taste characteristics (refined oil is less bitter).

In the case of olive oil, it is possible to fry on both refined and unrefined oils. However, for everyday cooking refined oil is quite suitable – in the process of frying the natural flavour of cold-pressed oil will still be almost lost.

Separately, it should be noted that manufacturers often mislead consumers by releasing sunflower oil with the addition of olive oil. Unfortunately, most often the content of olive oil in such mixes is no more than 5-10% – in other words, in front of you is a regular sunflower oil.

Coconut oil is also excellent for roasting. It can withstand high temperatures, has a pleasant taste and has a unique profile of fatty acids. In fact, coconut butter is a vegetable version of saturated animal fats, but it does not contain cholesterol.

Due to the special composition of coconut oil, the human body prefers to use its calories for current metabolic needs, rather than to preserve in the fat reserves (naturally, when used in adequate quantities). In addition, coconut oil fats are used for the synthesis of several hormones.

On the one hand, the composition of palm oil is close to that of coconut oil – it has almost no Omega-9. On the other hand, natural palm oil has a bright red color and an unpleasant smell. It always undergoes refining and chemical purification processes before being sold.

Unfortunately, such treatment can lead to the formation of carcinogens in palm oil. The role is also played by the fact that when fried in industrial conditions, this oil is repeatedly subjected to re-heating – which leads to the appearance of trans fats. That is why palm oil is considered one of the most harmful oils.

Although ordinary butter burns at temperatures above 150˚C and is not suitable for frying (except for weak heating when frying eggs), food can be cooked with melted butter. Read about how to cook ghee at home.

Ghee butter is heat-treated butter, purified from excess water and other impurities. It is widely used for frying in India and South Asian countries. In contrast to butter, ghee butter has excellent heat tolerance and can be stored for much longer.

Cooked ghee butter gives food a pleasant caramel flavor and amber color, and the butter itself contains large amounts of vitamin A and vitamin E. Separately, it should be noted that there are almost no harmful fatty acids Omega-6 in ghi butter – because they are not in milk.

The worst choices for cooking are sunflower, soybean and corn oils, which contain large amounts of Omega-6 fatty acids. The best frying oils are olive, coconut and canola oil (including refined versions of these oils), as well as ghee butter.