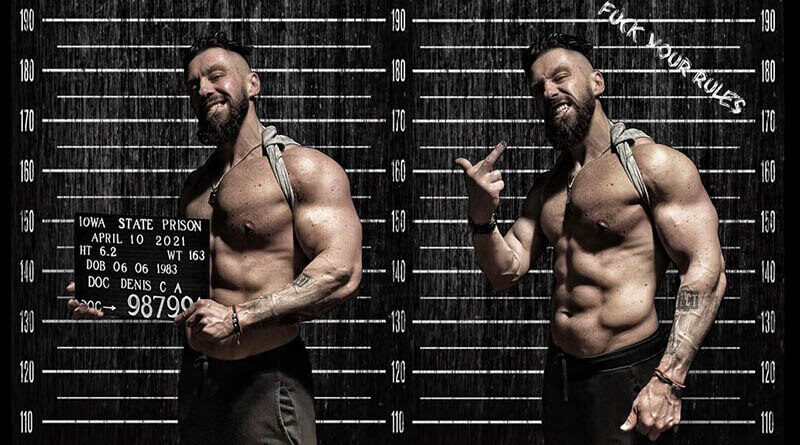 Girls suffer greatly from imposed beauty standards. But requests for “beautiful” pictures of men’s bodies are just as bad. Society increasingly condemns toxic remarks about women, but jokes about small penises continue to be perceived as something harmless. We’ve figured out why the world needs male body positivity.

Body positivity was not socially discussed for a long time and was not part of the agenda of the first feminists. It took a lot of controversy to get it talked about.

In 1966 the activist and author of The Enigma of Femininity, Betty Friedan, founded the National Organization for Women or NOW, the official association of feminists. It made it clear that women’s voices were becoming louder and the struggle for equal rights stronger. Supporters of the movement were dissatisfied with the American government’s anti-discrimination measures, none of which brought any significant results. Employers were reluctant to hire women, and the gap between men’s and women’s wages remained wide. NOW needed to mobilize women and show that they were ready to fight for equality. The founders said they would work on six fronts: advocate for constitutional equality and economic justice, fight for abortion rights, defend lesbian freedoms, and speak out against racism and violence against women. Issues of appearance and related discrimination were not raised at the time.

Prejudice based on appearance was first attempted in 1973. Activists Sarah Fishman and Judy Frispirit founded the Fat Underground movement to fight against unrealistic standards of female beauty. To get more attention, Fishman and Frispirit wanted to enlist the support of the National Organization for Women.

But NOW did not support Fishman and Frispirit’s activism. Most activists at the time felt that “the female form” hindered equality in a male-dominated world. For example, feminists Gloria Steinem and Jane Fonda openly went on diets. They argued that visible signs of “femininity,” including a higher percentage of body fat, distanced women from equality, and tried to get rid of even external differences between the sexes. The activists could not agree, and the body positivity movement did not receive much publicity.

Today, many people around the world support body positivity. But mostly these people are women.

It was not until the 1990s that society returned to the debate about imposed beauty standards. It was at that time that intersectional feminism was born, with its supporters arguing that women were restricted in their freedoms not only because of their gender, but also because of other factors, including being overweight. This is how body positivity finally made its way onto the current agenda of the National Organization for Women. More and more events appeared to support girls of all kinds. In 1992 British feminist Mary Evans Young established the International No Diet Day, which is still celebrated today on May 6. In 1996, Connie Sobchak and Elizabeth Scott founded the Body Positive Movement, which aims to “develop a relationship with the body dictated by love, forgiveness and humor.” Sobchak and Scott’s project includes courses and programs that teach people how to be positive about their bodies. These activities have helped the activists build an entire community of like-minded people.

The modern body positivist movement fights not only against the disadvantage of obese people, but also against skinnyshaming (discrimination due to thinness), eiblism (prejudice against people with disabilities) and other “shaming” and “-isms” based on the external data of a person. It is not just individual activists who belong to the movement – models, celebrities and many others are talking about body acceptance. For example, many celebrities do not hesitate to share their experiences with eating disorders. Among them are actresses Lily Rose Depp and Lily Collins, singer Taylor Swift. Plus-size models collaborate with famous brands and appear on the covers of fashion publications. For example, Ashley Graham, Katya Zharkova, Alexandra Deinega.

Why body positivity is not just for women

The role of critics of women’s bodies is most often played by men. But, oddly enough, they, too, suffer from imposed beauty standards. For example, young men worry that they are not thin enough, tall enough, or pumped up enough. In extreme cases, this leads to mental illness. Dysmorphophobia, a mental disorder in which people hate their bodies, is just as common in men as it is in women. A 2019 study by the Mental Health Foundation of Great Britain found that 28 percent of men worried a lot about their appearance, and 11 percent even had suicidal thoughts because of an imperfect figure.

I fit into the standards of appearance in our country, but I can’t say that I accept myself completely. All my life I’ve been worried about the volume in my legs: I don’t have “skinny sticks”, and when I buy pants, I have to go through several stages of self-abasement. When you look at mannequins, pictures of guys on social media, and then in the mirror, there is a dissonance. I feel a cult of pumped-up, skinny bodies, and it makes me uncomfortable at times.

Discussing this issue with friends is hard. I know that they may be worried about their looks too, but it’s still pretty hard to share. I have to talk to myself – to see the line between my own and imposed thoughts. It’s the only way to protect yourself from the pressure.

How men view their bodies is also influenced by penis size. There is a study that shows that the more satisfied a man is with the appearance of his genitals, the better his view of his body in principle. Women don’t have that connection.

According to a study by the American Psychological Association, the bigger a man’s penis looks, the higher his self-esteem. At the same time, almost half of the respondents were dissatisfied with the size of their penis. There is also evidence that 85% of patients who decide to have penis enlargement surgery are actually medically normal in length. Size seems to matter – mostly to the men themselves.

Although body positivity is a relative new movement, humanity has an idea of a variety of female figures. Standards of female beauty have varied from the “lush” forms of the Renaissance to the thinness of the 1990s. The representation of male heroes is not as diverse: the ideals embodied in ancient Greek statues and the Vitruvian Man remain the same. It is just that now we see them not in sculptures, but in advertising, movies, and media. It’s hard to imagine that Calvin Klein men’s underwear will not be showcased by models with Apollo’s body. A handsome man in the mass consciousness is usually clean skin, beefy muscles, and the absence of fullness.

Even the introduction of breakthrough ideas goes hand in hand with discrimination. Today, many designers seek to combine “masculine” and “feminine” in images by wearing skirts or heels on men. But how often do such clothes present themselves to overweight men?

“When it comes to changing our idea of masculinity, big bodies are the most stigmatized. Men can only wear dresses, lace and heels if they are skinny.”

A paradox arises: whatever fashion may be, body positivity has no place in it. And while progress is coming, the ideal of male beauty remains the same.

We shouldn’t blame a man for not conforming to some rules that other people have made up. Today it would be great not to tie body positivity to gender, because there is a stigma attached to different bodies, and men’s bodies as well. After the age of 30-40, it’s hard for a man to meet beauty standards because most of us don’t lead the most active lifestyles, and “keeping fit” is hard work.

I believe that body positivity expands our idea of beautiful, and I like this trend.

Who and how is changing the way we think about the male body?

There is no widespread and unified movement in support of male body positivity. But gradually there are heroes willing to prove that you don’t have to look like a gladiator to love yourself.

A Boston native weighing over 180 kilograms, Arcadio Del Valle modeled for Volare in New York City, worked with Brandon Kyle and shot for Dazed Beauty magazine. By his example, he showed that weight is not a barrier to success in the fashion industry.

In 2017, Canadian photographer Anthony Patrick Manieri created the Arrested Movement project. In it, he shows men from all corners of the world. Among the heroes are models of different ages, trans people, and people with disabilities. Manieri finds something beautiful in everyone and promotes the idea of male body positivity.

Brooklyn photographer Tarik Carroll was also inspired by the ideas of body positivity and created the Every Man Project photo project. After working in the fashion industry, Carroll realized that people with different looks have self-esteem problems. Moreover, Terik writes with surprise that even world-famous models worry about their figure: “As soon as I explored the possibilities of retouching, I saw that ‘perfection’ and ‘beauty’ are very subjective concepts. And when I started making friends and working with different models, I realized that body perception issues apply to everyone.”

In 2019, British online men’s health platform Manual launched a Men of Manual campaign where men talked about their relationship with their bodies.

In Russian media space, the icon of male body positivity could be Dmitry Krasilov. The dancer impressed audiences on the show “Dancing” to such an extent that Alexander Gudkov called him to the set of “Crying for Techno,” and the band Little Big called him to the music video for the song UNO, which became a hit of the Eurovision qualifying round in 2020. Although Dmitry has never claimed to be body positive, he shows that living in harmony with oneself is much happier.

Beauty standards still hurt women the most. And Bodypositive was born precisely out of a desire to keep girls safe from self-hatred, prejudice of others and crippling beauty practices. Today, a movement that helps people accept their bodies is supported by a large number of female activists.

But body positivity is not about gender, it’s about loving yourself and accepting other people for who they are. And if men shared its ideas, the world would be a better and safer place for people of all genders.

For the most part, men understand that you need to look good in order to make others (and girls in the first place) feel pleasant to talk to you, and they don’t make up all sorts of excuses for their laziness. Yes, there are exceptions when you really can’t do anything with your looks, but let’s be honest, most bodybuilders, so justify their failures and laziness, trying to give themselves more significance. I stick to the principle, “dude/dude-esque, you can look however you want, but don’t require me to encourage what I’m not comfortable with, it’s my freedom to talk and take things as I feel comfortable with.”